In an interview with Daily News, Prime Minister Ranil Wickremesinghe gives two main reasons for why an election cannot be held now: (1) the cost to government; and (2) the negative impact on the economy.

On the cost to government, he stated that the last election cost LKR 10 billion and that an election now would cost LKR 20 billion. However, the 2022 Performance Report published by the Election Commission shows that the total amount spent for the 2020 General Election held on 5 August was LKR 5.7 billion, approximately half the amount claimed by the prime minister. Hence, he is hugely off the mark on the actual cost incurred for the last election. His estimation that an election now would cost LKR 20 billion (4 times the cost of the last) is also without basis as the last election was considered more costly than normal, due to Covid-19 related protocols and precautions.

On the impact to the economy, the prime minister mischaracterises a positive impact as a negative one. He estimates future campaign spending by candidates to total LKR 30-40 billion.* Such spending by candidates would in fact stimulate economic activity and benefit the persons and entities that provide campaign-related services. It also benefits government revenue. The expected tax revenue, under currently announced policies, will be around 10% of GDP.** Even if only half the campaign spending was accrued as additional taxable income, government revenue could increase by about LKR 2 billion on the prime minister’s estimates of campaign spending. These are positive rather than adverse impacts on the economy.

Thus, (i) on the cost of previous and future elections, where his estimates are hugely overstated; and (ii) on the impact to the economy, where positive outcomes for economic activity, campaign service providers, and for government revenue are ignored to claim that an election would have a negative economic impact.

Therefore, we classify the prime minister’s statement as BLATANTLY FALSE.

* A study published by the Centre for Monitoring Election Violence estimated that the total campaign spending by all candidates in the 2020 General Election to be between LKR 10-13 billion.

Response by FactCheck.lk: Prime Minister lost on cost of elections

FactCheck.lk appreciates the feedback received from readers on the above factcheck.

This information is provided as clarification to some of the comments received, on the cost of the previous and future elections:

1. On the cost of the previous election

2. On the cost of future elections

The EC report does not provide an adequate breakdown of the cost of the 2020 Parliamentary Election (LKR 5,727.9 million) to facilitate an estimation of inflation related cost increases. The EC’s 2020 report provides cost components within the body of the report pertaining to only LKR  712 million or 12.4% of the total expenditure.

Wages of public servants have not kept up with inflation. Even if they had, inflation data between August 2020 and June 2022 (as shown in Exhibit 1), does not support the estimation of a fourfold increase in costs, as implied by the prime minister’s claim on total projected expenditure. 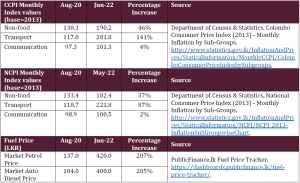 Note: FactCheck.lk was not able to obtain any officially collected or independently reported public data on the per-unit costs of printing materials for election-related documents.

Election Commission Performance Report to be presented to the Budget Committee Meeting 2022: https://elections.gov.lk/web/wp-content/uploads/pdf/admin_reports/AR2022_E.pdf