To evaluate the president’s claim FactCheck.lk consulted the Ministry of Finance’s (MoF) Annual Report 2020 and the Fiscal Management Report 2022.

Sri Lanka receives foreign loans both through the disbursements of previously agreed loans, as well as through new loans agreed upon, during any given period.

Sri Lanka received disbursements of USD 3,467 million from previously agreed loans, from January 2020 to August 2021. Sri Lanka also entered into new loan commitments of USD 2,962 million during that period (see Exhibit 1). Of these new loan commitments some have already been disbursed, including the USD 1,308 million loan obtained from the China Development Bank. These figures contradict the president’s claim.

Alternatively, if the president meant to refer to only new market-based loans as opposed to the new concessional multilateral and bilateral loans, the claim would still be incorrect. According to MoF, Sri Lanka obtained market loans amounting to USD 1,308 million between January 2020 and August 2021.

The president is incorrect in his claim that no foreign loans were taken during his tenure. The inaccuracy persists even if he was understood as referring to only new loans agreed after 2020 or was read as intending to refer to only new market-based borrowings.

Therefore, we classify the president’s statement as FALSE. 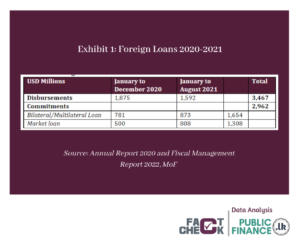 Annual Report of the Ministry of Finance 2020Access : https://www.treasury.gov.lk/p/annual-reports