The main claim is that Sri Lanka’s debt rose much faster over the five-year period from 2015-2019 than over the 10-year period prior to that.

Figures cited by the minister convert to the following: from 2005 to end 2014, the debt level of the country rose at an annualised growth rate of 13.3%; and from 2015-2019 it increased at a marginally lower annualised growth rate of 13.2%. In addition to his claim being contradicted by the minister’s own figures, the figures he uses are also not methodologically appropriate for the comparison being attempted. (See: Verité Research Insight “Demystifying increase in Sri Lanka’s debt”)

Since debt is taken in local and foreign currency, to calculate the increase correctly, it is necessary to specify the increase separately in local and foreign currency and then convert that increase into an LKR or USD amount at the exchange rate relevant to the date of comparison. Based on the minister’s statement, Exhibit 1 sets out the figures with end 2019 as the date of comparison.

The minister’s main claim is flawed on two grounds: First, his own figures don’t support his claim. Second the figures are also flawed for the purpose of the comparison. The corrected numbers show that both in absolute and relative terms Sri Lanka’s debt grew less in the 2015-2019 period than in the 2004-2014 period.

Therefore, we classify the minister’s statement as FALSE. 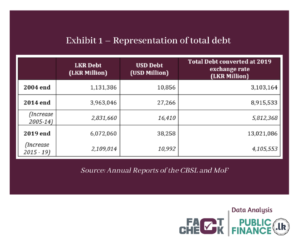