In his statement, the MP compares foreign exchange reserves of the South Asian region between 2019 and 2021, and states that reserves declined in Sri Lanka by 80%, while the other countries recorded an increase.

Exhibit 1 shows the change in foreign exchange reserves in all South Asian countries from December 2019 to November 2021. During this period, Sri Lanka’s foreign exchange reserves have fallen by 79.2%, which is almost 80% as cited by the MP; while all the other South Asian countries have recorded an increase in their reserves. Therefore, we classify the MP’s statement as TRUE.

Sri Lanka’s reserves were reported to have increased somewhat by end of December 2021. However, the increase was a result of including currency stocks that don’t fit the international definition of reserves (Balance of Payments Textbook, International Monetary Fund). This increase in December 2021 is because the CBSL re-classified the pre-existing Yuan based Swap from China as reserves. 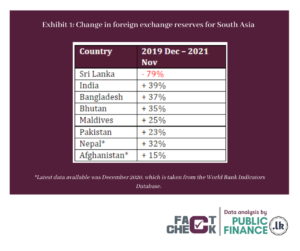 Respective publications of the Weekly Economic Indicators of Central Bank of Sri Lanka Available at; https://www.cbsl.gov.lk/en/statistics/economic-indicators/weekly-indicators

Respective publication of the Central Banks of selected countries