To evaluate the minister’s claims, FactCheck.lk consulted membership data as well as historical data on lending commitments that are publicly available on the International Monetary Fund (IMF)’s website.

The data sources show that Sri Lanka obtained membership of the IMF in 1950 (August 29, 1950); and that Sri Lanka has entered into 16 IMF arrangements since then, as claimed by the minister. (NB: While Sri Lanka received a Special Drawing Rights (SDR) allocation equivalent to USD 787 million from the IMF in August 2021, this is not considered a lending arrangement of the IMF).

Exhibit 1 shows that the highest facility of USD 2.6 billion was obtained in 2009. The minister referred to the amount approximately correctly and stated the year 2008.

The minister is approximately correct on the USD value and year of the largest lending arrangement obtained from the IMF, and he is correct regarding the year Sri Lanka joined the IMF and the number of arrangements that Sri Lanka has had with the IMF since.

Therefore, we classify his statement as TRUE. 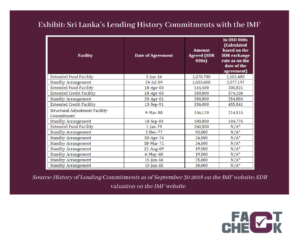 List of Members of the IMF available at https://www.imf.org/external/np/sec/memdir/memdate.htm [last accessed 15 February, 2022]