The former MP claims that (a) 10 Covid-19 patients die every hour in Sri Lanka, (b) the ratio of Covid-19 death to cases in Sri Lanka is 1.5%, and (c) Sri Lanka reports the highest daily Covid-19 death rate in the Asian region at the time of his statement (i.e., 11 August).

To evaluate this claim, FactCheck.lk consulted Epidemiology Unit of the Ministry of Health and Our World in Data.

On claim (a), the daily deaths due to Covid-19 reported by the Epidemiology Unit averaged 87.27 during 1-11 August 2021, peaking at 118 on the 11th. Accordingly, the highest that had been reported, (up to the date of the claim) was an hourly death rate of 4.917, which is much less than the figure claimed by the former MP (Exhibit 1).

On claim (b), the Covid-19 death rate can be evaluated against reported cases or the total population, and can be evaluated on a daily or cumulative basis. Therefore, there are four possible ways to discuss the death rate, and FactCheck.lk assessed all four of these calculations. The calculations were computed across the countries in the Asian region for countries reporting at least 500 cases per day, based on numbers available at Our World in Data.

On 11 August, the cumulative death rate against reported cases was 1.6%, which aligns closely with the former MP’s claim of 1.5% (Exhibit 2).

On claim (c), Sri Lanka has reported the 6th and 8th highest death rates in Asia based on current and cumulative deaths per day on 11 August. Based on current and cumulative reported deaths per million, Sri Lanka ranks 4th and 16th respectively compared to the region. Therefore, Sri Lanka does not have the highest death rate in Asia using any of the four criteria computed above at the time of the former MP’s statement.

Both claims (a) and (c) made by the former MP, i.e., on the number of Covid-19 deaths every hour, and Sri Lanka having the highest death rate in Asia are incorrect. However, the data closely supports his claim (b) “death rate of 1.5%”, based on the cumulative deaths relative to reported cases.

Therefore, we classify his statement as PARTLY TRUE. 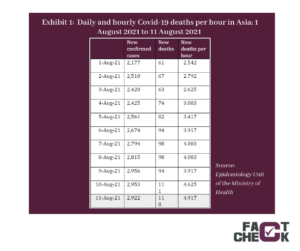 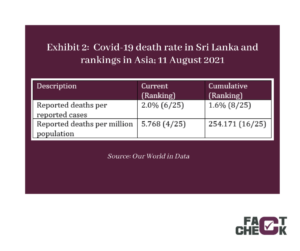 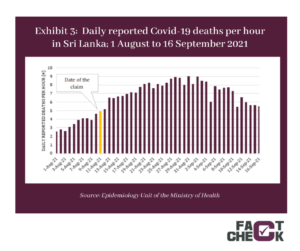