To check this claim, FactCheck.lk consulted World Bank national accounts data on GDP growth. FactCheck.lk evaluated the claim with respect to two criteria: a) GDP growth in 2014 and b) the five-year average growth from 2010 to 2014.

The state minister is wildly off the mark on both Sri Lanka and China’s rank in the world, as well in Sri Lanka’s rank relative to China, on GDP growth rate prior to the term of the Yahapaalanaya government. Therefore, we classify his statement as BLATANTLY FALSE. 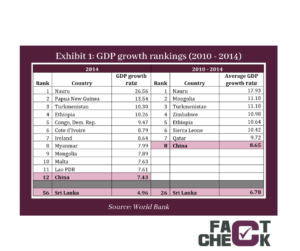