The second claim is that the reserve position was down by 7% to USD 7.6 billion when the government changed with the election of President Gotabaya Rajapaksa on 16 November 2019. GOR immediately prior to and after (on 31 October and 30 November 2019) was USD 7.8 billion and 7.5 billion respectively. The state minister’s claim falls between these two figures.

The available data is in line with the state minister’s claims. Therefore, we classify his statement as TRUE. 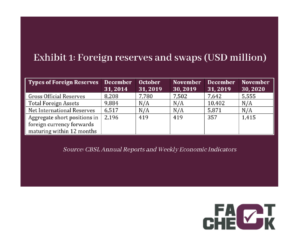 (i) Decline in GOR in 2020: by November 2020, GOR was USD 5,555, which is a reduction of 26% since November 2019 (ii) GOR Quality: USD 8.2 billion reserves in 2014 included USD 2,196 million worth of swaps maturing within 12 months, whereas in October and November 2019, swaps maturing within 12 months amounted to USD 419 million. By November 2020 swaps had increased to USD 1,415 million. This is indicative of a superior quality of reserves in 2019 compared to 2014 and 2020. (iii) Definitions of Reserves: There are three primary forms of external reserves. Gross Official Reserves (GOR) refer to the sum of government foreign assets and the Central Bank’s foreign assets. Total Foreign Assets (TFA) includes the foreign assets of deposit taking corporations to Gross Official Reserves. Net International Reserves (NIR) refer to gross official reserves minus any reserve related liabilities (which is total central bank debt excluding special drawing rights of the IMF).