In his statement the MP claims that tax revenue as a percentage of GDP has decreased under every government since 1981.

To check this claim, FactCheck.lk consulted the Central Bank of Sri Lanka’s (CBSL) Annual Report 2021 and the parliament website for information on the duration of parliament over the years.

The MP is not correct in attributing a decrease in tax collection to all governments. However, because he is correct in identifying a pattern of decrease, which also applied to most parliamentary terms of government we classify the MP’s statement as PARTLY TRUE. 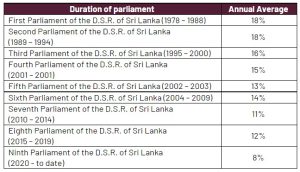 Duration of Parliament from the Website of the Sri Lanka Parliament Available at; https://www.parliament.lk/duration-of-parliament [ Last accessed 08 June 2022]