To evaluate MP Premadasa’s claim, FactCheck referred to data available in the weekly economic indicators of the Central Bank of Sri Lanka.

FactCheck attempted to understand the source of the incorrect claim of 40.9%. Exhibit 1 shows that the MP likely made an error in either the calculation or phrasing of his statement. If he phrased his claim as saying that tax revenue in 2019 was 40.9% greater than in 2020 (using the smaller 2020 revenue as the base/denominator), his claim would have been correct. However, the MP’s phrasing specifies the reduction of revenue in 2020 against 2019. In this case, the expected calculation would be to use the revenue of 2019 as the base—which only gives a reduction of 29.0%

N.B. To avoid this problem of percentage changes being represented differently depending on the direction of analysis, economists sometimes use the mid-point between two numbers being compared as the base (midpoint formula). Using this formula would give a percentage change of 33.9%—which is still quite far from the claimed 40.9%.

*FactCheck’s verdict is based on the most recent information that is publicly accessible. As with every fact check, if new information becomes available, FactCheck will revisit the assessment 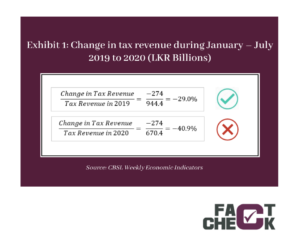