In his statement, the MP states that a) industries in total contribute to 26.4% of GDP, b) industrial exports contribute 10% to GDP and c) 10% of export against the 26.4% production is a very low share of total industrial production to export.

To check this claim, FactCheck consulted the National Accounts and Annual Exports Statistics published by the Central Bank of Sri Lanka and World Bank Development Indicators.

On claim (a), according to the provisional data, the Gross Domestic Product (GDP) at Market Prices amounted to LKR 14,973 billion in 2020 where industrial production contributed LKR 3,930 billion, or 26.2%. This is in line with the minister’s claim.

Therefore, we classify his statement as TRUE.

**FactCheck’s verdict is based on the most recent information that is publicly accessible. As with every fact check, if new information becomes available, FactCheck will revisit the assessment. 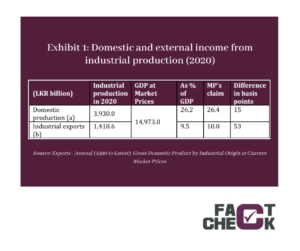 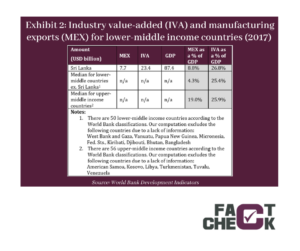