The MP claims that Sri Lanka foreign debt increased from 72% to 96% in 2019 [24% point increase]. However, it is unclear whether the MP was referring to foreign debt as a percentage of GDP or total debt.

As reported by the Central Bank Annual report for 2020, as a percentage of GDP, foreign debt of the central government was 30% and 41.3% in 2014 and 2019, respectively. Alternatively, as a percentage of total central government debt, foreign debt was 41.6% and 47.6% in 2014 and 2019 (See Exhibit 1). Therefore, the numbers cited by the MP are hugely incorrect, on either interpretation of his statement. 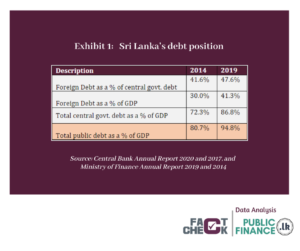