Is MP Gunawardena correct in the claims he makes?

The debate was brought up on 6th February, 2018, at the proposal of Mr. Ranil Wickremesinghe, a month after the Final Report of the Presidential Commission of Inquiry to investigate and inquire into Serious Acts of Fraud, Corruption and Abuse of Power, State Resources and Privileges (PRECIFAC) was released. The purpose of the debate was to discuss both the bond commission report and the PRECIFAC report.

According to Standing Orders, any motion must be accessible in all three languages in order to be brought up for debate in Parliament. However, prior to this debate, an agreement was made that if the reports were available in English, parliament would go ahead with the discussion, without waiting for translations in all three languages. At the time of the debate, the bond commission report existed in English, but the PRECIFAC report only existed in Sinhala.

The Parliamentary Hansard of February 20, 2018, recorded the discussion related this adjournment motion debate in parliament.

As seen in the relevant extracts from the Hansards (See Exhibits 1 and 2), MP Sumanthiran did not raise any issue with regard to the translation of the bond commission report, which was available in English, and not available in Tamil. Sumanthiran simply stated that the PRECIFAC report, which is distinct from the bond commission report, was available only in Sinhala, and as a result, the TNA would not able to participate in the debate on the PRECIFAC report.

The statements by MP Sumanthiran in parliament make it clear that he was not specifically requesting for a Tamil translation but for a translation into either English or Tamil, as the PRECIFAC report was only in Sinhala. He went on to explain that the reason he did not ask for a translation of the bond commission report is because the report was already available in English.

Therefore, MP Gunawardena was wrong on both counts. Mr. Sumanthiran did not raise an issue on the language of the bond commission report. The language issue he had with the PRECIFAC report was not that it was not available in Tamil, but that it was available only in Sinhala and not in either English or Tamil.

Further, following MP Sumanthiran’s comments and at the intervention of MP Lakshman Kiriella, the members of parliament voted and agreed to postpone the debate. 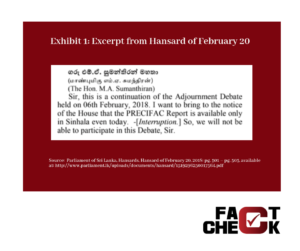 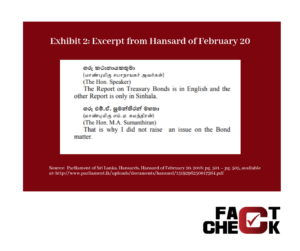