The following statement was attributed to Finance Minister Mangala Samaraweera, who spoke at a Cabinet meeting on September 11. The statement, translated from Sinhala to English, is as follows: a tax income of 1,800 crore (Rs. 18 billion) has been lost due to reduced cigarette sales. The attributed statement is understood to refer to a tax revision that took place in November 2016, as there has hardly been a measurable impact of the next revision, which took place on 31 July 2018.

Details on tax/price revisions:
The revision consisted of applying two taxes. The first was the increasing of excise tax on cigarettes from 4 October 2016. The second was the re-application of the previously removed value added tax (VAT) to cigarettes from 1 November 2016. In response, the Ceylon Tobacco Company increased the price of cigarettes by more than the combined tax increase.

Fact Check:
The higher price of cigarettes did result in a reduction in cigarette sales. But did that reduction result in reduced tax-revenue of 18 billion as claimed?

The Minister’s statement can be fact-checked by comparing 2017 cigarette sales and tax-revenue to those of 2016. The comparison is shown in Exhibit 1.

Sale of cigarettes: The data shows that cigarette sales decreased after the tax and price revision. Between 2016 and 2017, the sale of cigarette sticks reduced from 3.79 billion to 3.15 billion. This is a decrease of 0.64 billion cigarettes, or 16.9%.

In sum, although cigarette sales dropped after the tax and price increase in 2016, tax-revenue increased by about Rs.18 billion, instead of decreasing by Rs.18 billion as claimed in the statement.

Verdict:
The data shows that the statement attributed to the Minister is precisely contradictory to what took place. Therefore, the statement is classified as BLATANTLY FALSE. 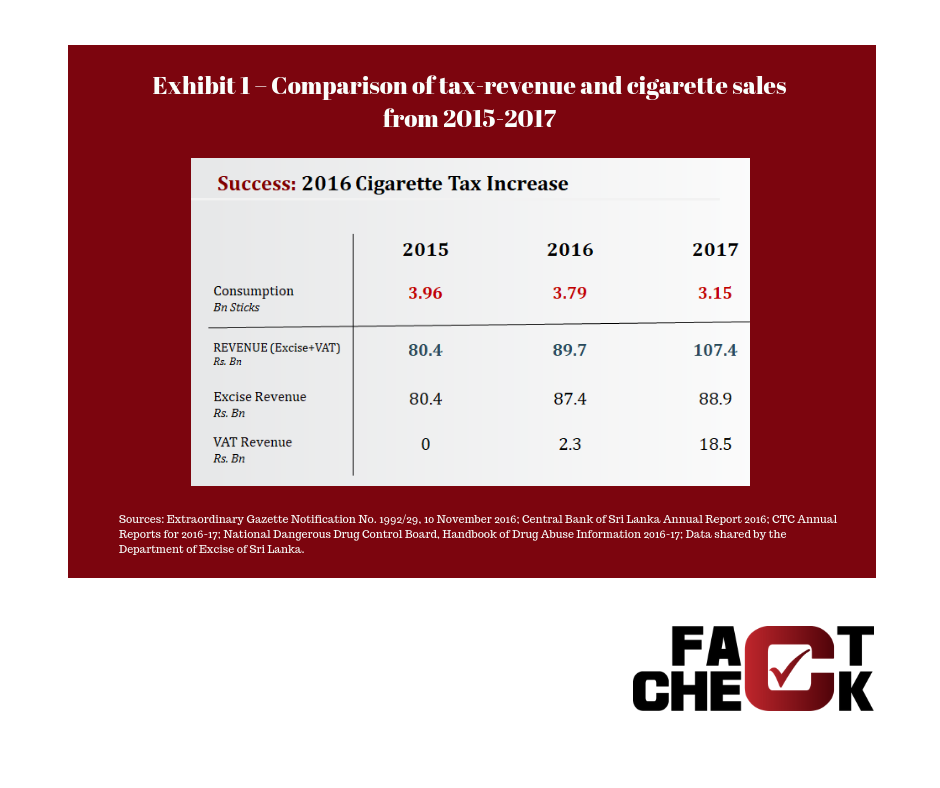