To evaluate this claim, FactCheck.lk consulted decision documents and notices from the Public Utilities Commission of Sri Lanka (PUCSL) and Ceylon Electricity Board (CEB) Annual Reports. Since electricity is billed differently, in tiers that depend on the level of monthly usage, FactCheck.lk evaluated the claim for all six tiers of billing.

Prior to MP Wanniarachchi becoming the minister of power and energy in 2013, the electricity bills were supplemented by a fuel adjustment surcharge due to the global oil prices escalating to above USD 110 a barrel. During the MP’s tenure there were two stages of adjustments to the tariffs. The first was to increase the tariffs in 2013. The second was a set of adjustments in 2014 to reduce tariffs and to remove the fuel adjustment charge, as the price per barrel reduced below USD 100.

PUCSL documents indicate that by this second set of adjustments, bill values decreased by between 24.6% and 26.3% for five of the six billing tiers and by 10.2% for the highest tier. But this level of decrease is only in relation to the increased price instituted in the first adjustment in the MP’s tenure. In fact, during the MP’s tenure starting in 2013, the tariffs and bills increased substantially (even after the fuel adjustment charge was removed), for four out of the six tiers and reduced by the claimed amount only for the two lowest usage tiers. In the lowest two tiers, the bill reduction was mostly due to the fuel usage charge being removed alongside the reduction in global oil prices.

Therefore, the MP misrepresents as a success of her tenure, and claims undue credit for, the reduction of electricity bills. The reduction she cites was mainly a result of undoing the previous tariff increases imposed also during her tenure and the removal of the fuel surcharge, with the reduction in global oil prices. Nevertheless, according to CEB data, the two tiers for which the 25% reduction was achieved, mostly due to the removal of the fuel surcharge, included 58.7% of domestic consumers in the country.

Despite the undue credit claimed, a majority of the billing units did receive the reduction in bills in the magnitude cited by the MP. Therefore, we classify her statement as PARTLY TRUE. 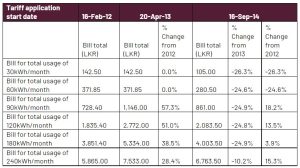 PUCSL Notice to Public in 2012