In his statement, the MP states that (1) Sri Lanka imported 574,000 metric tonnes of fertiliser in 2020, and (2) Sri Lanka, using 284kg per hectare, has the highest chemical fertiliser consumption in South Asia.

To check the first claim, FactCheck.lk consulted the Central Bank of Sri Lanka’s (CBSL) 2020 Annual Report and checked for any alternative data sources with the National Fertiliser Secretariat. The Central Bank provisionally estimates that Sri Lanka imported 952,000 metric tonnes of fertiliser in 2020 (see Exhibit 1). This figure on imports is significantly higher than the MP’s claim of 574,000 metric tonnes.

To check the second claim, FactCheck.lk referred to chemical fertiliser consumption data from the Food and Agriculture Organisation (FAO) and the World Bank (WB). The FAO defines fertiliser consumption as “the quantity of plant nutrients used per unit of arable land”. In which, “fertiliser products cover nitrogenous, potash, and phosphate fertilisers (including ground rock phosphate)”, and arable land as “land under temporary crops (double-cropped areas are counted once), temporary meadows for mowing or for pasture, land under market or kitchen gardens, and land temporarily fallow. Land abandoned as a result of shifting cultivation is excluded”.

The MP’s claim has three significant errors. It underestimates fertiliser imports and overstates the amount and the South Asia ranking of Sri Lanka’s chemical fertiliser consumption. Therefore, we classify his statement as FALSE. 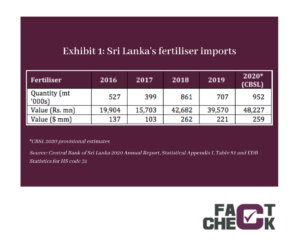 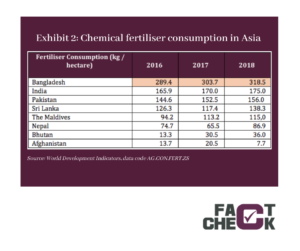