In his statement, MP Harsha De Silva compares the country’s monthly rate of debt increase during the first four months of 2020 against the 2015-2019 period.

To evaluate this claim, FactCheck referred to the Central Bank’s latest available monthly bulletin, for May 2020, and Central Bank’s 2019 Annual Report for historic data.

During the 5-year period between end December 2014 to end December 2019 total outstanding government debt increased by LKR 5,545 billion (Exhibit 1). This is proximate to, and even a little less than the LKR 5,700 billion claim referenced by the MP.

Within the first four months of 2020 total outstanding government debt increased by LKR 993 billion. This aligns with the LKR 1,000 billion claimed by the MP.

Therefore, we classify the MP’s statement as TRUE.

*FactCheck.lk’s verdict is based on the most recent information that is publicly accessible. As with every fact check, if new information becomes available, FactCheck.lk will revisit the assessment 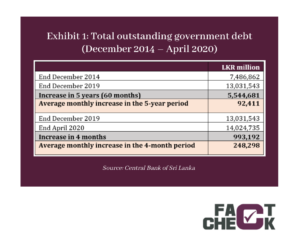 There are various reasons for the nominal LKR value of the stock of government debt to increase over time, not all of which can be attributed to present policies and decisions of the government. For example, even if a government does not take any additional debt, the stock of debt counted in LKR terms can increase due to an LKR depreciation against the currency in which debt is borrowed. Also refer to FactCheck’s previous evaluation of a claim by then-Leader of the Opposition Mahinda Rajapaksa for a more detailed analysis of the interpretive considerations, when evaluating the increase in debt. However, in this case the depreciation impact of the LKR to USD rate has only a limited impact on the calculations and does not affect the accuracy of the MP’s claim about relative increase in the debt.

FactCheck.lk, “MP Mahinda Rajapaksa miscalculates the increase in debt and its causes” available at: https://factcheck.lk/claim/mahinda-rajapaksa-2