To check this claim, FactCheck consulted Ministry of Finance (MoF) annual reports and Lanka Sathosa (LS) annual reports. Notably, LS and the MoF report contradicting figures prior to 2016. LS also does not have data available after 2017 and provides two different figures for 2014 in the 2014 and 2015 annual reports. FactCheck evaluated the minister’s statement on the basis of both sources.

According to MoF data, however, Lanka Sathosa did not incur losses in the five-year period prior to 2015, as stated by the minister. However, MoF reports that Sathosa’s net loss from 2015 – 2019 amounts to LKR 11.9 billion, which falls well below the minister’s stated figure.

The minister’s first claim can be substantiated based on MoF data, despite being contradicted by LS data. On the second claim, only the MoF has the relevant data, which contradicts the claim. Using the most favourable evaluation of the minister’s statement, his first claim can be supported by MoF data, but his second is shown to be inaccurate on the same data. Therefore, we classify his statement as Partly True. 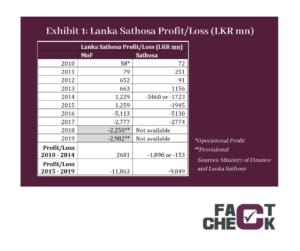