To evaluate this claim, FactCheck.lk consulted the IRD and Central Bank of Sri Lanka (CBSL).

On claim (a), according to the IRD Annual Performance Report for 2019, the total number of registered taxpayers amounted to 1,705,233 (see Exhibit 1). Even if the minister was referring to only individuals and employees who pay tax (and not corporates and other bodies), they each substantially exceed the minister’s claim of 1,000 (Exhibit 1).

On all the claims: the number of credit cards, the number of tax files and transaction value per card, the minister figures are grossly exaggerated.

Therefore, we classify his statement as BLATANTLY FALSE.

Note: Despite the flow of the statement, if the minister meant to distinguish card holders as a much smaller subset, each credit card holder would have to hold at least 10 credit cards on average, and spend an average of over Rs. 100,000 per year on all those 10 cards, for the numbers stated by the Minister to be valid. 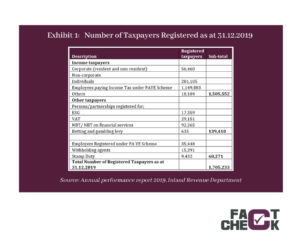 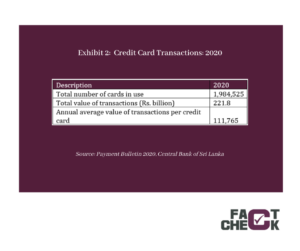