In his statement, former Governor of the Central Bank of Sri Lanka (CBSL) Cabraal claimed that during the period of 2015-19:

To check these claims, FactCheck.lk consulted the Annual Reports of the CBSL and the Annual report of the Ministry of Finance (MoF).

To check the second claim, FactCheck.lk calculated the increase in Sri Lanka’s external public debt, which includes State Owned Enterprises debt under sovereign guarantee. Exhibit 2 shows a USD 12.5 billion increase between end 2014 and end 2019, and not USD 15 billion as claimed by the former governor.

On the third claim, Exhibit 3 shows that reported gross official reserves reduced by only USD 0.57 billion between end 2014 and end 2019, and not USD 1 billion as claimed by the former governor.

The former governor’s figures do not align with all three of his claims. Therefore, we classify his statement as FALSE. 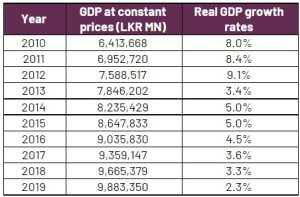