PUCSL Chairperson Janaka Ratnayake claims that the fuel price can be reduced by LKR 150 instead of the LKR 20 downward revision that took place on July 17. Based on his claim, a litre of 92 Octane Petrol can be sold at LKR 320 (470-150).

To evaluate this claim, FactCheck.lk consulted the fuel price formula designed by the Ministry of Finance (MoF) in 2018 and other data published by the Central Bank of Sri Lanka (CBSL). The fuel price formula generates the price that fully recovers all the costs of the Ceylon Petroleum Corporation (CPC), including the taxes that are paid to the government. This fact check is limited to the petrol price due to data limitations.

Based on the fuel price formula (see Exhibit 1), the price of a litre of 92 Octane Petrol as at July 17 (LKR 470) implies an importation price of USD 160 per barrel (which is about USD 1 per litre). To sell a litre of that petrol at LKR 320 as claimed by the PUCSL chairperson, Sri Lanka should be importing 92 Octane Petrol at a maximum cost of USD 105 per barrel, which in rupee terms would have been about LKR 237 per litre.

Customs import documents were handed over to COPE by the PUCSL chairperson as the basis for his claim. FactCheck.lk has sourced some of these documents and placed them on the FactCheck.lk platform. The documents show that 92 Octane Petrol has in fact been imported at less than USD 105 per barrel (see Exhibit 2). Therefore, applying the formula to the importation price allows petrol to be sold at a price lower than LKR 320 with all costs and taxes included as per the formula.

Therefore, we classify the PUCSL chairperson’s statement as TRUE. 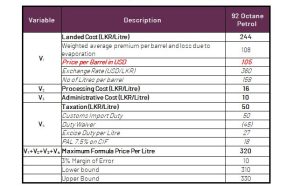 Note: The standard application of the formula assumes that import cost of fuel is equivalent to the Singapore Platts price which was the basis used to conclude the statement made by Minister Kanchana Wijesekera as TRUE (https://factcheck.lk/factcheck/minister-wijesekera-not-at-a-loss-on-fuel-price-revisions/). However, this fact check uses actual fuel import costs that have come to light since then.